This table was just a fun little re-do.  It was in great shape with just a few little bruises that give it a little character.  I painted it a fun color, Dixie Belle Mermaid's Tale.  Prima Blossom Flight is the name of the transfer.  I love just love the slightly Asian vibe this transfer gives.  As always it is topped with Polycrylic to protect the paint and design. 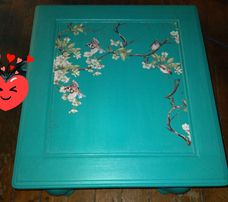 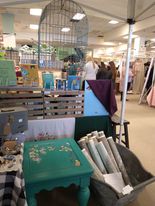 If you have read my blog or followed my FB page, you know our lighting is really bad.  So, I wanted to make clear that the rectangles down on the bottom of the piece are really not yellow, it is a reflection from my flash, lol.

This TV set, made by the CBS-Columbia company was produced sometime between 1950-1959.  As you can see from the label on the back it could be used to receive color TV programs.  CBS was the first to be permitted to transmit color.  In long run, the quality was not good and the company eventually shut down production.  The original manual was still inside the cabinet.  The TV was no longer usable of course and I removed the insides.  It was really dusty!  There was also a turn table hanging out of the back of the cabinet.  I couldn't figure out at first how it fit in, but eventually found an L bracket that held the drawer where the turn table should have been.  Now that opens for more storage.

I kept the original knobs and station numbers.  I added a back to the bar storage area and the original glass front that protected the TV screen is now a shelf.  The lights will be added to the inside of the top of the bar. 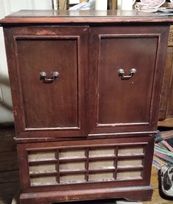 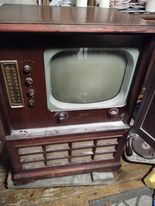 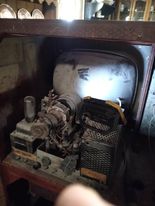 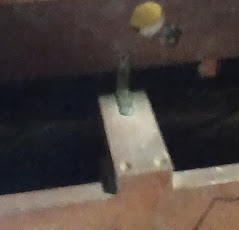 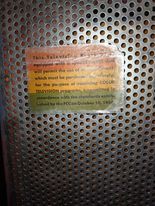 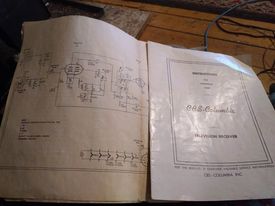 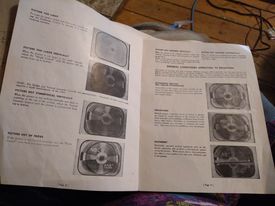 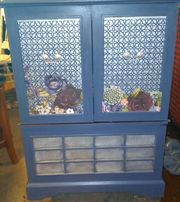 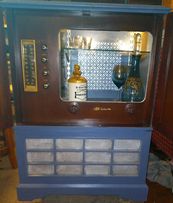 Posted by RESCUE REHAB at 5:40 PM No comments:

This 1940's Waterfall vanity was great structurally but had a few cosmetic flaws.  Sadly I realized the bench really had too many problems, so after a couple of tries with other chairs, I settled on this Ethan Allen maple chair to go with it.  I really like the round mirror on the vanity....I kept the original pulls after applying some gold gilding wax to them.  There are little disks that seem to be bakelite in the handles,  although one disk is missing.  I chose Dixie Belle Evergreen, which is a really vibrant green that I thought would make a beautiful backdrop to the Wondrous Floral Prima transfer.  I used gilding wax for the gold accents on the mirror and the stripes on the sides of the vanity.  I did have some problems when the transfer that was supposed to go on the edge of the vanity twisted over on itself when I tried to apply it.  I had to order another transfer and some extra paint, which caused a delay  It was also a bit of a struggle to work on over the holidays, but now that everything is calmed down I am back to work.  The dimensions on the vanity are:  18 inches back to front, 61 from the floor to the top of the mirror, and 45 1/2 across the front.  The price on the set is $265. 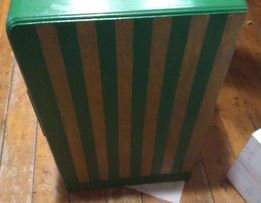 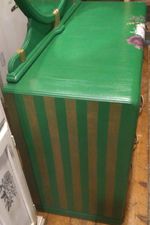 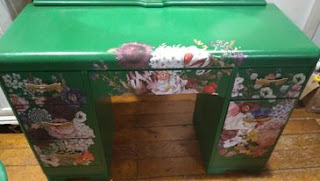 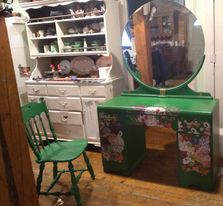 I have to say this is the most difficult, most stubborn piece I have ever worked on.  I had seen it advertised last summer and when the price dropped I arranged to purchase it.  I probably would have purchased it even if I had seen it in person, but it was more damaged than I expected.

This piece was supposed to be a German secretary desk.  I had seen pictures of the damage to it, and was pretty sure I could fix it.  As it turned out, I ended up removing the drop down desk front altogether.   The drop-down was attached to the desk with two pins.  The hinges that were on it to hold it up did not appear to be original as they were not attached properly and were not working.  I was unsuccessful at finding any hinges that would support the weight of the drop down and question whether it was ever really meant to be used in that way.  At some point the keys to this piece had obviously been lost, because the top of the drop-down, above the lock had been gouged in an attempt to open it.  I had originally decided to paint the drop-down because of the damage to it.  When I realized that between the damage and the difficulty finding hinges to support the weight, the piece would be better off without the desk, I removed it.  I removed the cubby holes of the desk, that look like they had been added recently anyway and painted the new display area and added Blossom Flight transfers.

The cupboard below had it's own set of problems.  Without a working key the doors did not stay shut properly.  The door to the left has a lower latch, but without the key to lock the right sided door, it would swing open.  This is the second German piece I have had that locked, instead of having knobs that would open a door.  Without knobs and no key this can be a problem.  I ordered some keys based on measurements I took of the lock after removing it and I was happy to find that they worked!  I did use silver gilding wax on the keys, hinges, and locks, because the silver looked better with the blue painted parts of this piece.

The door with the leaded glass also had its lock broken at some point.  It no longer will lock, but a replacement key serves as a knob, and a magnetic catch insures that the door will stay shut.  I also had to replace part of that as the metal plate was not shaped properly to connect with the magnet.

Another odd problem with this was that the shelves and walls of this part of the cabinet were....green.  It was not paint that colored it green, quite honestly I scrubbed, rubbed and sanded and still could not remove it all.  In the end I had to apply multiple coats of shellac to cover it before I could stop the bleed through.  There is one transfer inside.

Finally, the veneer on the top was in very bad condition....dry, broken and brittle and just needed to be removed. I sanded lightly, painted and added transfers

I do believe this has turned, again, into a lovely piece of furniture.  I am glad that after weeks of frustration I was able to give this piece a chance. 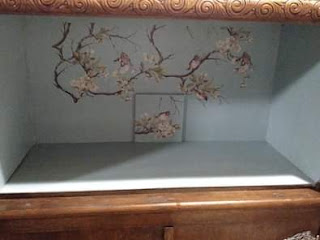 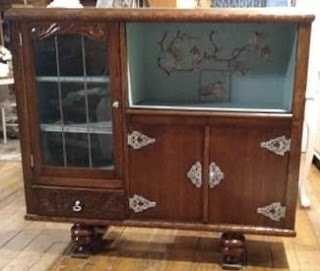 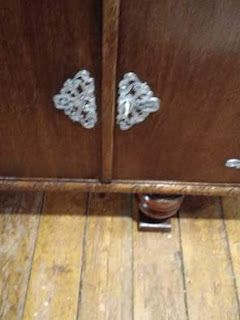 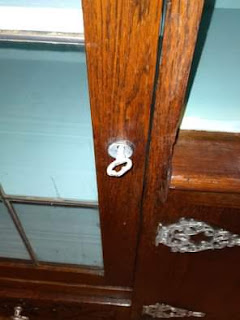 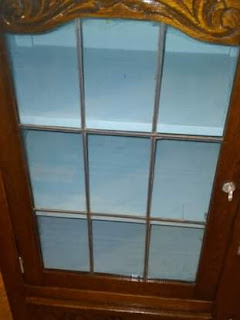 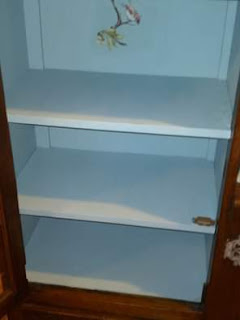 Posted by RESCUE REHAB at 2:20 PM No comments:

Wow, what a busy summer!  Our Farmer's Market, where the Rescue Rehab cabin is, opened this summer, during the Covid crisis with many concerns.  We knew that while locals might shop, we would be missing the business from the many tourists who stop at this location to mark their completion of their journey across the "Al-Can," the highway that joins the Alaska and Canada.  To our relief, many Alaskans chose to explore their state, so we were not hard hit by the lack of out of state tourists.

First, I have to admit this little table is not "all wood."  I cannot count the number of times I have been asked, by a customer,  to paint an "all wood" piece.  I usually just paint it without revealing the truth.  Most modern furniture has at least some parts that are "wood" that consists of wood, but in glued and compressed form.  I have painted many pieces, that, like this, have wood on the essential parts, like legs, but the "aprons," are very often compressed wood.  If this piece were solid, all wood, I wouldn't have painted it and it would have been refinished and sold at a higher price point.

After prepping, this piece was painted in Dixie Belle Fluff, which is an off-white color.  I used portions of Rose Celebration transfer by Prima, taking the design down the front and onto the drawer.  The knobs are painted gold, and the piece was top-coated in Polycrylic.

I imagine this as a perfect piece in an entry way, where mail can be stored and essentials like keys be placed for quick access when rushing out the door.  But of course it would look lovely in several other applications also.  This is headed to Fairbanks for the Vintage Faire this weekend. 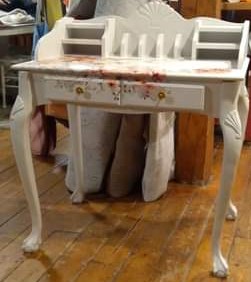 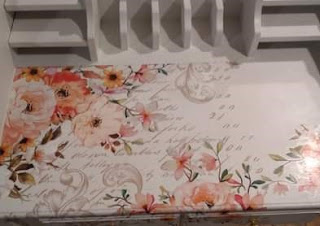 This is a modern, very nice mission oak table.  Other than one scratch there was really nothing wrong with it.  Except.....these tables are really common, and most people are looking for something a bit different.  I prepped the table as usually and painted it with a color I mixed myself.
I used part of the Blossom Flight transfer from Prima, which is one of the newest releases.  It is very popular right now and looks so pretty, especially on blue, gray and green pieces of furniture.  I have more and intend to use this transfer on the German Secretary that I hope to get to next week.  Things have been very hectic here on the farm, so I am happy to get something done to take to the cabin at all.   I will be bringing this to the cabin on Saturday, but I think it already has a new home. 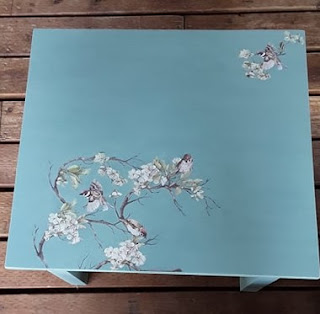 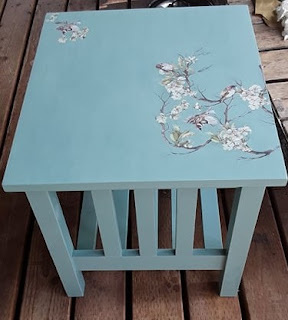 I have waited quite a while to upcycle this vintage sewing machine table.  I had an idea of what I wanted to do, it just took me a while to get to it.  Several years ago I purchased some registers that had come from a house built in Ohio in 1831.  Two now belong to my daughter and she uses them on the wall by her desk to hold papers.  This register is cast iron and probably dates from after the house was built, I believe at one point I found a date of 1890.
It was challenging for me to cut the opening in the table so that the register would fit down into it properly.  Because this register had a chip out of the corner, I framed it to cover the chip.  While that prevents the extension from closing flat, it can still be partly closed which means that the coffee bar can take up less room if necessary.
I used Dixie Belle paint in Kudzu and Poppy Transfers from redesign by prima.  The top has Bombay Mahogany stain by Minwax.\
The sign/cup holder was an old cupboard door, painted in Kudzu, with a Poppy transfer and vinyl cup and lettering, made with my Silhouette machine. 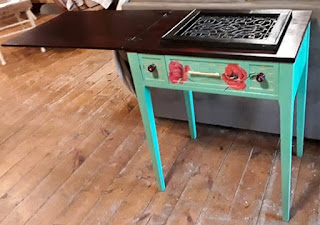 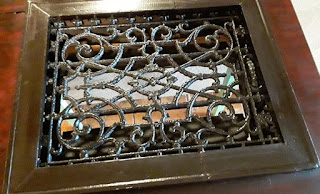 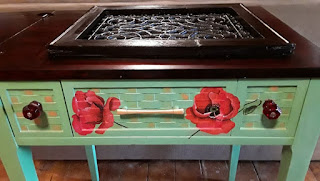 Posted by RESCUE REHAB at 7:35 PM No comments:

Email ThisBlogThis!Share to TwitterShare to FacebookShare to Pinterest
Older Posts Home
Subscribe to: Posts (Atom)
https://mjmhps.wordpress.com/ Feel free to check out my past posts on my blog's former home.