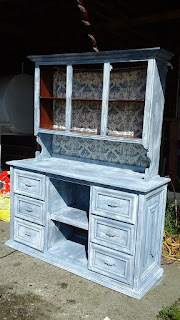 I have realized for a while I have not been utilizing my space in my Farmer's Market cabin in the best way.  I love the long 72 inch table that I made, but it has not sold.  Because of that a lot of things are on it and below it.  It really does not follow the "rule" of drawing the eye upward.  It also is nearly impossible to layer my small items.
I have had this dresser since last summer.  I honestly had never seen one like it. 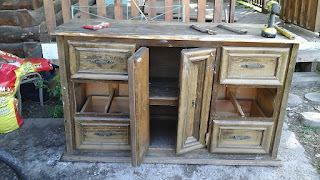 Heavy doesn't even define it well.  It had a tiny little undersized mirror screwed onto the top.  It is tall standing above my waist, right about counter height.  When I looked at it at the garage sale, I really thought I would eventually turn it into a kitchen island and at $10 it was a steal, an ugly steal, but a steal, lol.....fast forward a year.  It was still sitting around and nothing had been done.  I also had the top to a china cabinet that was mounted to one of our walls.  It was an awkward place for it and it was time to move it.  A nagging thought at the back of my mind was that it could be mounted on this dresser and become a massive china cabinet.  I finally decided to give it a try.  I removed the doors from the cabinet, because I wanted open shelves for displaying at the cabin.  The middle doors in the dresser were also removed, because they were broken.  They are really heavy, as are the drawers, the sides of which are an inch thick!  Certainly heavy enough to have been used for an island, and sturdy enough and large enough to hold pans!  I think I can pull them part-way out and display things in them.
A good scrubbing followed by some chalk paint in a denim color, with a wash of gray over it, and it sure does look like a massive china cabinet!  My friend Donna Wilkes: http://distresseddonnadownhome.blogspot.com/ sent me the wonderful fabric and I put it on cafe rings, strung on fabric and held with hooks, so that I don't have to cut the fabric.  Then I hung it on the back of the cabinet. 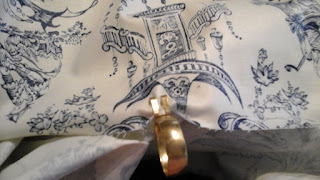 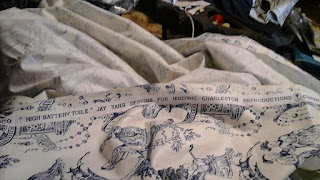 I really love this piece now and after the market is over it may come back home!
Shared at:http://thecottagemarket.com/2015/08/a-morning-cup-of-joe-diy-projects-recipes-more-features-linky-party-9.html
http://www.funkyjunkinteriors.net/2015/08/pj-294-upcycled-link-party.html
http://thecottagemarket.com/2015/08/a-morning-cup-of-joe-diy-projects-recipes-more-features-linky-party-10.html
http://www.findingsilverpennies.com/2015/09/silver-pennies-sundays-link-party-and-features-137.html
Posted by RESCUE REHAB at 6:03 PM