I had originally thought about keeping the blue cabinet that I put together and painted for Rescue Rehab's summer home at the Highways End Farmer's Market.  I was going to bring it home and use it in my kitchen, replacing this cabinet that I bought a couple of years ago. 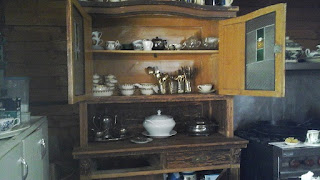 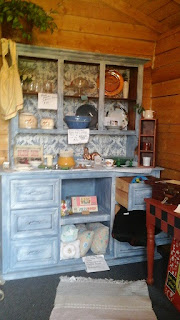 I really liked the blue cabinet, it had a lot of room, and was very sturdy.  Everyone who came into the cabin seemed to really like it too.  This cabinet in my kitchen was shabby too...really shabby, and chippy.....and (ugh) boring brown.  I had tried to find out more about it but was never successful.  I was a little concerned about painting it, but the finish was so bad, that I finally decided that it really didn't matter.  I love the carved flowers and the leaded glass windows.  The problem with the windows is that everything about the cabinet was so dark they really didn't show up very well.  Another problem, with even thinking about moving the cabinet is that the right front bun foot was glued in place.  It is pretty heavy, so when we set it in place I glued the foot and put it together.  It hasn't been move since, and I am a little reluctant to put much strain on it by moving it.
I decided to mix up some thick white chalk paint and give this cabinet a couple of coats on just the outside.  It brightens up the kitchen now and I like it so much better. 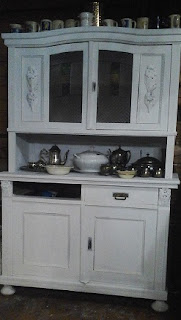 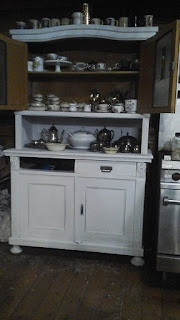 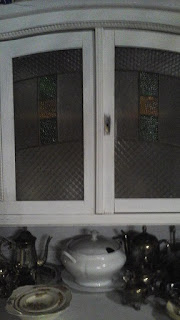 It is still somewhat difficult to see the detail in the the windows, and I am not sure that painting the inside of the cabinet white will change that much, but I may try it.  I am thinking of maybe putting a few battery powered lights inside.  Have you ever seen a similar cabinet?  Let me know if you have.  I am very curious about its origins.  I am behind in my blogging and have several posts planned, although they will be a little out of order......
Shared at:http://www.funkyjunkinteriors.net/2015/10/pj-299-an-upcycled-link-party.html
http://thecottagemarket.com/2015/10/cup-of-morning-joe-diy-projects-recipes-more-linky-party-3.html...
http://www.findingsilverpennies.com/2015/11/finding-silver-pennies-sundays-link-party-and-features-142.html
http://knickoftime.net/2015/11/vip-212-autumn-thanksgiving-decor.html
http://adirondackgirlatheart.com/2015/11/vintage-charm-4.html
http://www.theessenceofhome.blogspot.com/2015/11/share-your-style-party-38.html
Posted by RESCUE REHAB at 10:23 AM