I have to say it, this is one of my favorite pieces EVER!  I would normally put sewing machine parts that I bought back together again. When I realized several pieces were missing though, I began to think of things I could make out of the parts I did have.  A couple of years ago we went in and salvaged things out of a log cabin that was later burned down.  There was a really nice, large cutting board that my son-in-law worked extra hard to remove.  Doug is always so generous in lending a hand!  Can I just ask though....don't you clean your cutting boards???????  I mean there are different ways to do it if you are afraid to wet it down good.  I think an old fashioned way was to rub dough on it to get extra flour off, scrape it, then salt and lemon juice?  This may have never been cleaned!  I had to scrape, sand, and scrape some more, then use degreaser to get all of the gunk off....yuck!  But it was pretty wood and still has enough marks and imperfections to go well with the cast iron legs. After I measured and drilled holes in the cutting board I bolted the cutting board to the legs.  I countersunk the holes and added stainable putty so it would have a smooth  surface,  I wanted the top to be pretty dark.  This piece is sold and will be used to display and photograph apparel, most of which is quite colorful, so I think it will make a lovely contrast.  I used Minwax walnut stain, and then mahogany gel stain over that.  I did repaint the legs and repaint the letters gold.  I think she is a beauty! 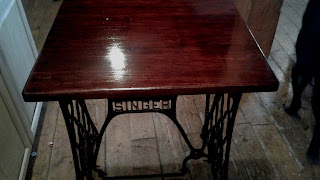 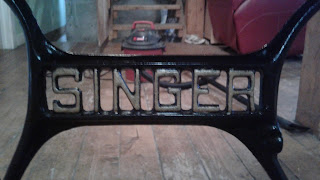 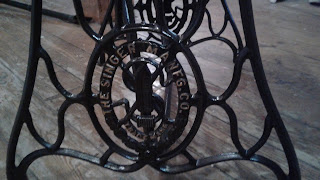