So sorry if you clicked on a link to a post called "Saved" about this cute little blue sink.  I feel like the little boy in the movie "Home Alone."  I made my post disappear......and I have no idea how to get it back....... 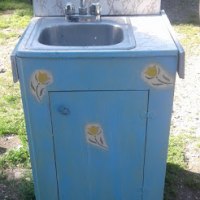 Posted by RESCUE REHAB at 7:20 AM No comments:

I wish I had a nickle for every time someone asks me how I find all of this good stuff...lol.  I usually admit that I actually think that most of the time it finds me.  Sometimes it finds me a second time!  I bought this old table several years ago at an estate sale.  Unfortunately, most of the items were reproductions, gathered at the couple's frequent trips to local thrift shops, as the relatives conducting the sale revealed.  The table had nice details, but lots of damage.  One foot was a little shorter, and had many tooth marks from a puppy that had used it for a chew toy.  The pretty walnut veneer on top had bubbles and was missing in spots.  There were quite a few other damaged spots all over the table.  I took it home, filled the damage, painted it gray and used it for several years, then sold it at my garage sale(not Rescue Rehab), for the same price I had bought it....$5.
Fast forward several months and a customer asked if I could redo a table she had bought at a garage sale.  When she brought it to the cabin I had to laugh.  I told her that I was quite familiar with the table........ 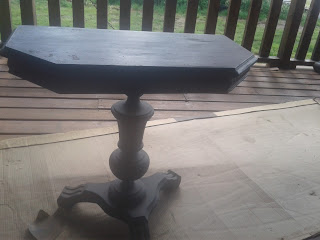 It had found me again!!!  Lol.  It now had more damage on top although the repairs to the other parts held up rather well.  The initial thought was for the top or the body of the table to be restained and the rest painted white or cream.  While prepping the table it became clear that re-staining would be very difficult, as there was damage to more of the table than I actually remembered.  The walnut veneer also continued to bubble as I worked on it, so I did the only thing that seemed reasonable, which was to remove it.  I used a hair dryer rather than a heat gun to warm the glue and make it easier to remove.  I took a leap of faith in painting the table.  I had a dark cream color of paint that I really liked.  After painting
I used a dark wax which really highlighted a lot of areas, including the damaged places, which gave it an aged look that seemed to fit the table well.  I topped it with a rubbed wax finish.  Interestingly enough I had never removed the furniture tacks that were on the bottom of the table, but I did as I was working on it.  I have seen old tables that had fabric bags tacked on for sewing supplies, etc.  I wonder if this did at some point.
When I contacted the customer to let her know it was done and give her the quote, I told her that it was on the condition that she liked it.  It wasn't exactly what we had discussed, but she was very relieved when she picked it up, lol!  I guess I made her a bit nervous......so glad she liked it!!! 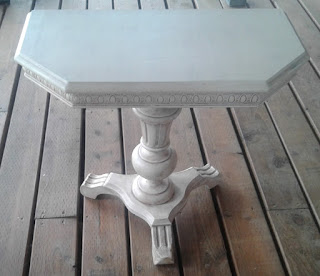 http://www.beyondthepicket-fence.com/2016/10/talk-of-town-link-party_11.html#more
Posted by RESCUE REHAB at 2:09 PM No comments:

I haven't done anything that was girlish for a while.  While looking through the paint aisle at the store, I found this pretty pink and decided the time was right for a girl project.  My daughter-in-law found this chair in her attic and brought it to me, knowing I would be happy to give it a make-over. I couldn't find any labels or maker's marks on the chair anywhere.  It was all wooden, with little wooden pegs  holding it together, except for the right arm, where they were missing.  I really am not sure whether this was hand-made, but it does appear to be.  Maybe a shop class project, or a proud grandpa project?  It is was very plain, but very functional.  I had to add screws in place of the missing pegs.   After sanding, scraping and painting, it was still a little plain, so I added some little flowers.  A couple of coats of poly will help protect it.  It will be headed to the cabin tomorrow. 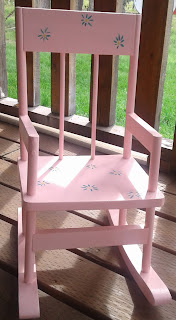 Posted by RESCUE REHAB at 2:03 PM No comments: 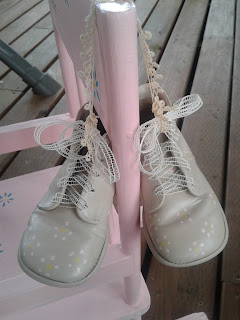 Many times I will buy a trunk, box or other container of items.  Sometimes it seems to be a time capsule of someone's life.  I am always so torn with these items.  It is inevitable that they will be cleaned, sorted and divided into groups to be sold at my cabin.  It often feels like a big responsibility, saving bits and pieces of a life and finding ways for them to be useful to someone else.  There were a couple of these pairs of sweet vintage leather baby shoes in a trunk I bought.  While I find the scuffed white leather baby shoes lovely in their own right, I thought that painting them might make them more appealing for a modern display in a nursery.  While painting is my life, I am no artist!  I decided that after painting the shoes this pretty creamy color I would add some flowers, so I chose something very simple that I was sure I couldn't mess up!  I added some poly after painting to help protect them.  I used some vintage ribbon to lace them up and tied them together with this vintage lace.  They will be at the cabin on Saturday. 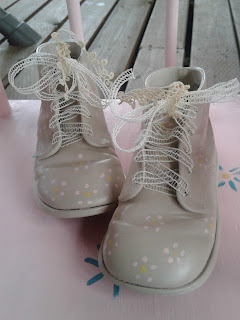 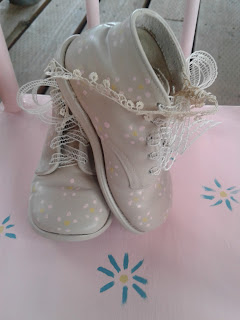 Shared at:
http://bec4-beyondthepicketfence.blogspot.com/2016/09/talk-of-town-link-party_27.html#more
Posted by RESCUE REHAB at 8:20 AM 2 comments: