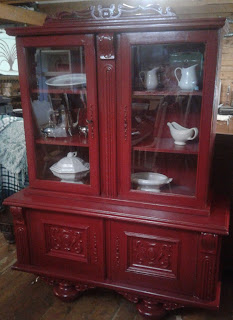 First of all, I cannot believe it has been so long since I posted!  I had a busy couple of weeks buttoning up the cabin, went on a couple of small picks, took some time to go visit my new grand, and I also took some time out to dig my house out from all the clutter that collects while we are running around trying to cram everything we can into our short summers.  After that it was full steam ahead to finish two projects that had been waiting.  Somehow, someway, I forgot to get pictures of the first......sigh. 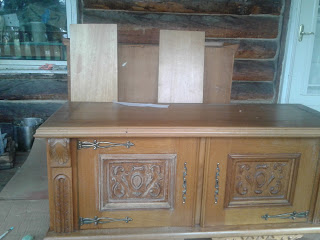 The next project took so much longer than it should have.......I bought this china cabinet of uncertain age and origin.  Then promptly forgot to take before pictures of the top half...no excuse......
It had interesting and unusual details and I felt that it would be so much prettier after it had been painted.  This was mid-August with only a few weeks before the cabin would close.  I thought it would make a great anchor piece and hopefully sell before closing up for the winter.  Lol, that didn't work out as planned.  I usually stay away from really trendy colors on large pieces.  While they are very striking, they don't always sell well here.  The life span of a piece with an unusual color can be shorter.  I take a lot of care and time so that my paint jobs hold up, so it can make removing them difficult.  So, late in the process of painting this piece a lovely trendy turquoise  color, I realized that the new paint that I was using just did not meet my standards for durability.  I just was not happy with it. 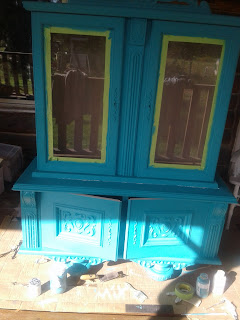 Sneak peek pictures had been posted on  my  Fb page and there had been interest in the piece so I explained why it wasn't going to be available.  Shortly after,  I was contacted by a repeat customer who was interested in it,  if I could re-paint it red.  The long process of removing the paint began,  I still have kids at home and other obligations so don't usually have time for marathon sessions.  I chose a pretty red from Americana Decor paint.  It was very bright and not the aged red look that we wanted.  After several coats of red, I brushed on walnut stain and then wiped it off.  The grain on this piece is pretty deep and  the stain settled into the crevices very nicely giving it the look I wanted.  I chose Rustoleum Clear Shellac for a durable top coat.  The lower cabinet doors had odd faux hinges that served no purpose, as the doors have piano type hinges, so I never re-attached them.  There are no handles for this piece but there is a key that will open the doors. 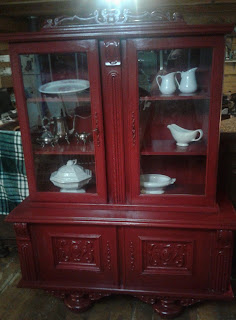 I think this and another  cabinet I did for the same customer will compliment each other nicely. 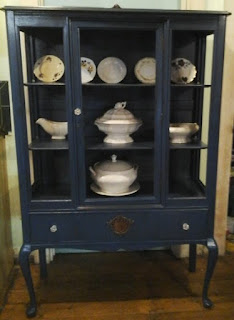