I was contacted and asked if I could repair this piece.  Once I had a chance to look it over, I realized that it actually had once been one side of a vanity.  Its pealing veneer and a one inch square hole on one of the sides was a give away.  The veneer is quite a bit worse than the picture shows.  Some was very brittle, some was barely hanging on, and some was covered in glue. 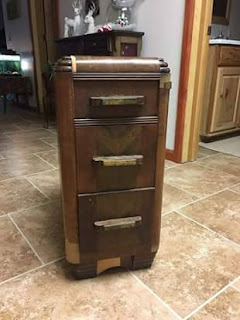 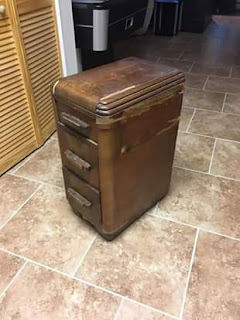 The before pictures were taken by the owner.  The after pictures were taken here and show my constant struggle with lighting.  This piece has not turned red despite my picture!  I cleaned the piece and sanded where I would need to adhere veneer and patch.  I had hoped to find veneer that was a close match to what was already on this and was not successful.  I used what was usable on the piece, took some from my stash, and patched other places.  I reglued what was usable back onto the piece, then soaked the veneer I would add to make it pliable.  Next step was to glue it on and weight it.
When all pieces were dry I sanded and filled in the gaps with plastic wood.  There were a lot of gaps!  There was also the hole to fill.  Since the plastic wood is white, I used small amounts of brown paint and stain to try to blend the areas of repair.  A couple of coats of Polyshades followed. 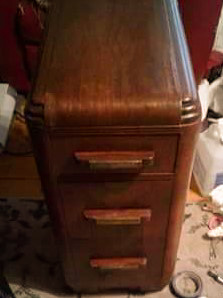 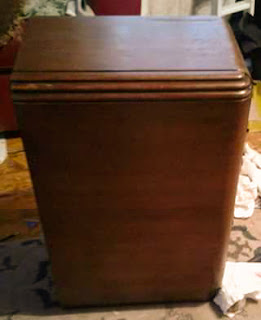 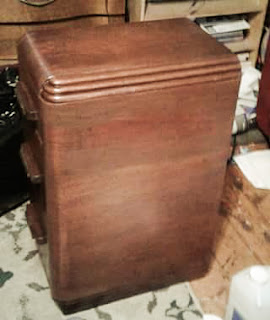 Lots of glare in this picture.
I hope the owner will be happy....I am happy that this piece is now usable!
Shared at:
http://www.funkyjunkinteriors.net/2017/04/diy-salvaged-junk-projects-373.html
http://www.sadieseasongoods.com/talk-town-67/
http://adirondackgirlatheart.com/2017/04/vintage-charm-78.html