New Look for a Rocking Chair

As the summer gets busier I seem to get worse at taking before pictures.  This is a platform rocker, some people call it a cricket rocker.  It was most likely made by a company in Indiana, named Tell City Chair Company.  The company went through a couple of name and location changes, but remained in the same area which was actually named after the company eventually.  It closed its doors in 2011, after 147 years.  This particular type of chair was made from the 1940's to the 70's.  Many people remember having them in their homes, but the fabrics and colors used would not be popular these days.
This chair had been painted green, while its original state would have been a clear finish over the maple wood.  I wanted a brighter finish, so after stripping, painted it white with a matte finish over it.  I covered new cushions with this handwoven European grain sack fabric.  It is an oatmeal like color with two aubergine stripes.  I am fascinated by these fabrics, which are between 60-100 years old.
Before the skirt 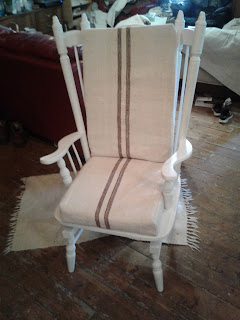 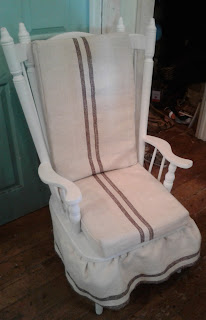 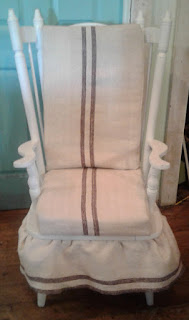