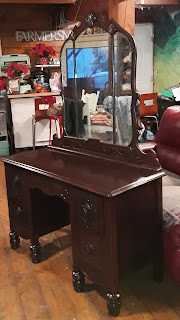 When I first saw this pretty vanity for sale I was intrigued by the interesting grain of the wood.  I had a hunch, but would not be able to confirm it until I had picked it up.  The grain of the wood looked quite unique and beautiful, but I knew from estimating the age from the picture, that there would be more to the story.  Once I picked it up,  I was able to confirm my suspicion that it was actually done with a faux graining technique.  At the factory, a crafts person would have hand painted, or possibly used some type of stencil to recreate the look of exotic woods on this piece.  The striping would have been used to simulate zebra wood, or zebrano.  The other graining, I believe is meant to simulate rosewood.  This vanity is likely from the 1920's-30's.  It had wooden wheels, but most of them were broken, so they were easily removed.
I worked carefully on preserving the faux grain on the drawer fronts and aprons.  Without it I don't think the vanity would be nearly as charming.  While most of the vanity was sanded,  I used a product on the faux grained areas, that preserved the look of the grain without changing it much.  With these pieces, especially one with such an interesting history like this one, I do not try to make it look new.  My goal is to preserve it without completely changing it.  Protect it without destroying the original look.
As delivery on the piece neared, I needed to put the mirror on, to take pictures, and to test whether it would be stable.  As I feared the original brackets were long past usable.  The screw holes were wowed out, with no good way to fix them.  I had no bracket that I thought would work, and the originals were incredibly short for such a tall mirror.  I had these drawer rails in my stash and I hoped they would work as brackets.  They did and they are far more stable than the original probably ever were.
Ready for delivery tomorrow to someone who bought it for herself for Christmas!! 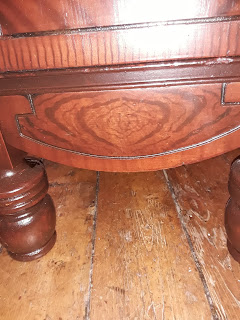 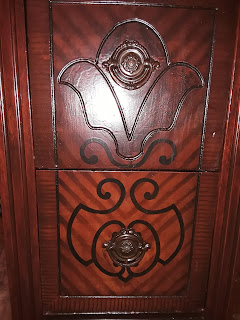 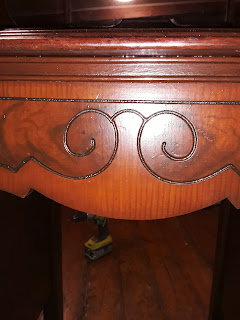