Another Oak Dresser with Provenance

I saw this piece advertised on a local sales list.  I was pretty sure it was a diamond in the rough.  When I arrived to buy it, I could see it was very rough.  Structurally it was wonderful and sound, but the finish was another matter.  At some point someone had painted it yellow and also added a top finish that crackled terribly.  I am sure that was not the intention of the person who did it, but quite frankly it was horrible. 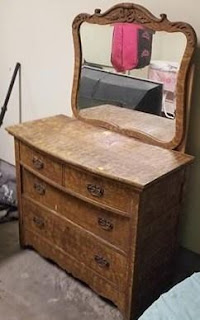 The couple that owned it explained that it had belonged to a Grandfather  of the young woman and, didn't know who had it before that.  They said they had plenty of furniture and didn't need it.  I thought that was quite sad, since it was probably better than any other piece they probably had.
This dresser should have had a harp which is a decorative piece of wood with arms that hold the mirror up.  This was gone and they were using two pieces of wood to hold the mirror up.  I am surprised it didn't break, as this mirror is very heavy.
It took weeks before I had time to work on the dresser and even more weeks to complete it.  Removing the old finish and paint was very slow going.  If you don't work carefully you run the risk of doing a lot of damage to the wood.  Both sanding and stripping had to be done carefully to prevent damage.  There are some areas that still show bits of the yellow paint because any further striping or sanding I felt would damage the wood.
I added an oil finish that helped condition and add the proper color back to the wood.  Our weather was so humid for so long it was necessary to allow that to dry for a very long time before I added shellac.
I have added some screw eyes to the back of the mirror and recommend that it be wall mounted.
During the process of refinishing the piece, I found what I believe to be the signature of a former owner on one of the boards on the bottom, under the lowest drawer.  It says "Chester Edgerton
Underhill, Ohio June 27, 1904.  It is written in beautiful script that is hard to get a good picture of. 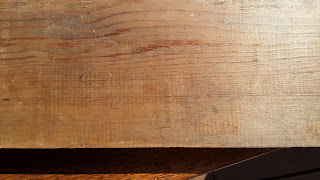 When I still had my Ancestry membership, I looked Chester up.  I believe I found him.  He would have been in his 30's in 1904 and he was a farmer in Underhill, Ohio.  This dresser was probably made sometime between 1880 and 1904.
The measurements on this dresser are 41 inches across the front, 18 1/2 inches deep and 33 inches tall and is available 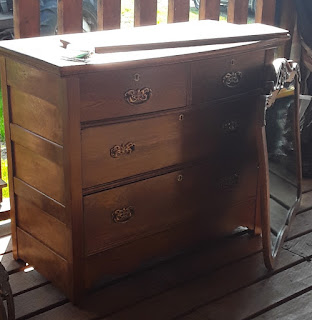 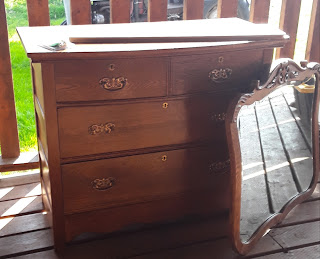 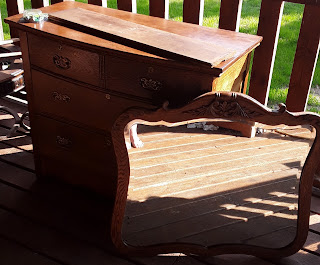 Posted by RESCUE REHAB at 6:46 PM No comments:

First I cannot believe it's been so long since I have posted.  At the beginning of this season at the cabin we had hail on several days and of course the rain that came with it.  For a few weeks after that we had several weeks of hot sunny days.  That was good for bailing the hay we needed to get bailed, but it also kept me busy watching grand kids.  For most of this month, is has rained and been quite humid, which makes it difficult to finish furniture.  I have finally finished one of the oak pieces I have tried to get done for so long.  I stopped at a sale where a man had recently passed.  His sister from out of state had been tasked with settling his estate.  There really was not much at the sale, but when I saw this I new it was a wonderful piece, and a quick walk around enabled me to see that it had been stamped E.R. Peoples Fairbanks, AK.  I felt that any piece marked like this was interesting, and  I also realized this was a sold oak piece, no veneer.  The drawers looked good, but as a whole it was quite dirty and the finish was coming off. 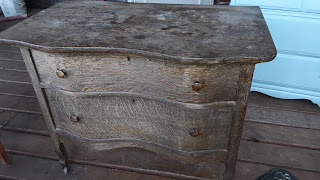 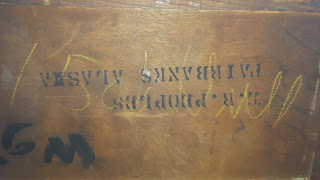 I am always curious about the history of the pieces I buy.  E.R. Peoples and his friend built connected houses in 1909.  They were married to sisters and this was one of the first modern homes in Fairbanks.  Mr Peoples owned the E.R.Peoples General Merchandise store.  I do not know the date that the store opened, but chances are it was during the early days of the gold rush in Fairbanks, around 1902.  While I found references into the 20's of the store, the Peoples moved to Washington state by 1919.  They were friends of Judge Wikersham and I found references to them in his diary.
I removed the old finish and cleaned the wash stand up.  I used an oil to restore the color to the wood, as it can look too light after sanding.  The downside is that you must wait long enough for the oil to be completely dry before adding shellac.  With her pretty serpentine shape and glowing new finish, I feel that she is a wonderful piece, that hasn't lost her original character.  I can only wonder who owned her and what adventures she saw. 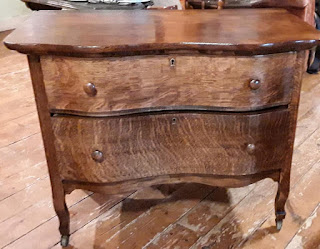 Posted by RESCUE REHAB at 8:34 PM No comments: