I noticed this piece for sale in another town.  I knew what it was and was sure it was a reproduction, but I thought it would be a great piece to paint.  I didn't really imagine though, that it would still be for sale 3+ weeks after I first saw it.  I was sure someone else would snap it up.  After about 3 weeks I contacted the owner, who said yes, they still had it and since they had inquiries but no takers, it would probably still be for sale when I could finally get there.  A few days later and we were able to pick it up. 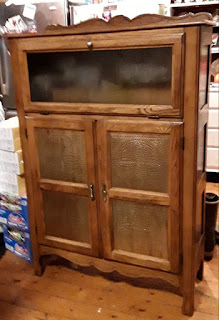 I did a lot of research.  No original pie safe would be made in this way, with a window(and a light, that I later removed because it was unsafe!).  I just couldn't find a manufacturer of this particular type of reproduction.  Weeks later, I finally found that the plans for this piece, and I believe kits also were offered through American Woodworker Magazine.  Very interesting!  So it was a home-made kit, probably, after seeing the home it came out of, made by an older man for his wife.
I originally began to paint this piece dark blue but it just did not suit it.  I finally settled on sage green, with silver hardware and accents and white inside with these Re-Design by Prima transfers.  I was able to re-paint the punched tin pieces silver, after they had been "faux aged" with something that made them look rusty!  Ugh, didn't like that look at all. 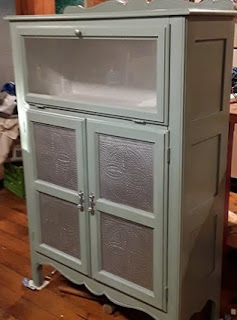 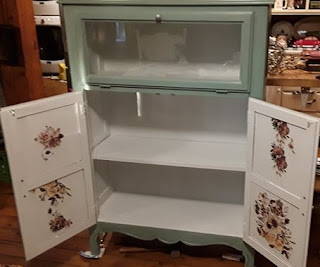 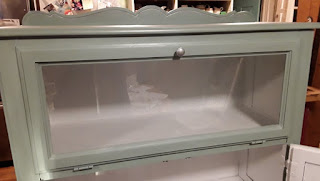 This piece took countless hours of work, but I think the result was worth it.  This is 36 1/2 inches across the front, 14 front to back, and 57 inches tall at the back.  This piece will be for sale at the Christmas Bazaar.
Posted by RESCUE REHAB at 3:32 PM No comments: