I bought this from a living estate at the end of the summer.  The owner was moving out of state to live near his wife who was in a facility being cared for because she had dementia.  Sadly I saw that she died a month or so later.  The couple were collectors and had also sold antiques throughout the years.  They had some truly wonderful pieces and I wish I could have gotten more than I did.
This little piece is probably pine and probably would have held a chamber pot and had a washbowl on top.  It has towel bars on each side.  It is pretty old and has square nails.  The left door latches with a hook on the bottom of the shelf, while the right door's handle turns and has a wooden latch on the inside.  Although not pretty I decided not to paint the inside(even though part was already painted.)  You can really tell the age by looking inside.
I am not one to usually paint an antique, but this had been painted at one time and retained small bits of green paint.  It wouldn't have been unusual for a piece of this kind to be painted, so I felt that I would not be hurting it to paint it.  I replaced the drawer handles, which were too large and not original, with wooden handles.  The stand was painted in a two-toned blended technique and then I  applied some re-design by Prima transfers.  It will be at the Booster Bazaar. 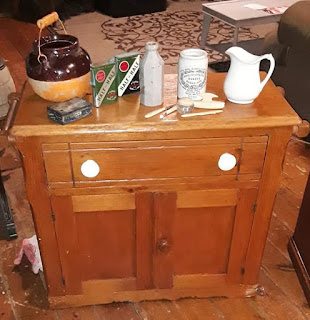 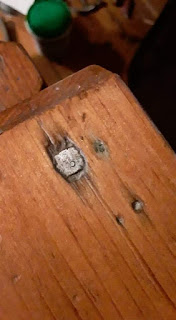 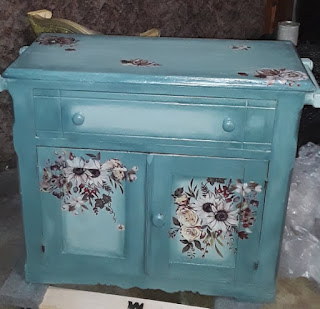